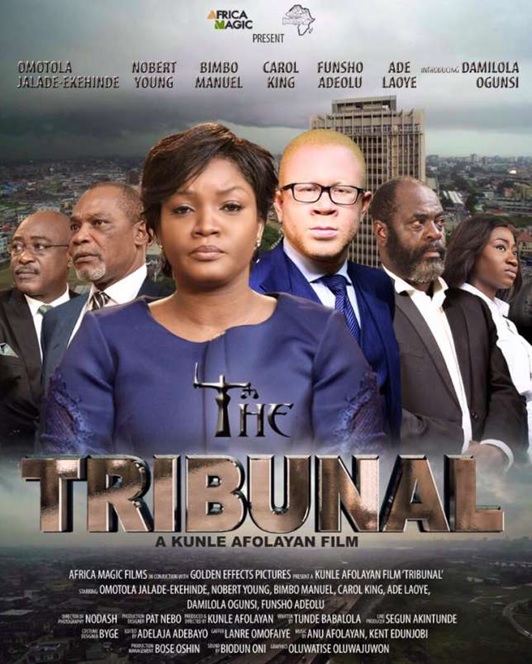 Following the collaboration between Kunle Afolayan’s movie studio Golden Effects Productions and Africa Magic to produce three block buster films titled ‘Omugwo’, ‘Roti’ and ‘Tribunal’, The Tribunal which is the last to be released is now showing in cinemas across Nigeria.

Omugwo which was the first of the three movies to be released was more approachable in the day to day life of an average Nigerian home which throws insight into a very important tradition in a every home. Roti was great but was more of tragedy as compared to the happy notes in ‘Omugwo’. The Tribunal on the other hand, sort of falls somewhere in between the two in terms of tone and mood. Not particularly made as a comedy movie but The Tribunal, however, has a certain level of tragedy and great comic relief in between the movie. Tunde Babalola who also wrote Figurine; Afolayan’s 2009 Epic movie which was a cinema hit, wrote the Screenplay for ‘The Tribunal’. Very few Nollywood movies dive into the legal system as stories in that light are very difficult to pull off distinctively, but in Afolayan’s case with ‘The Tribunal’ he did a good job making the story very explicit and precise to the point. If you are a lover of great conversations in movies, then you need to see this one. Though with little senses, the characters interpreted their roles to a maximum level of understanding and the choice of character for the movie also gave it a very high level of believability. Each character chosen was so appropriate with the role he/she was given. The Tribunal is focused on the issue of discrimination and just not any type of discrimination, it focused on discriminating pigmentation which is not one of the many form of discrimination we see in Nigeria often.

Ifeanyi Imoh (Damilola Ogunsi), an albino, who has been unfairly relieved of his duties at a bank is being forced to take up his case to the court and his friend Tanimowo (Ade Laoye), who is a young and enthusiastic law school graduate requests that Disu (Funsho Adeolu) a lawyer who has had his fair share of physiological problems to help them gain justice. Ifeanyi Imoh, takes up his boss Arese Abebe (Omotola Jalade-Ekeinde) in court. In reality, people with albinism suffer from psychological scars from societal prejudice. And just like the character Ifeanyi, they are often taunted with monikers like “Oyibo pepper.”

‘The Tribunal’ highlights this problem and at the same time the healing process of Disu the laywer to the plaintiff, also, the dedication Ade Laoye put into her character in the movie also brought out the spice and excitement in the movie. The movie also stars Carol King, Adeolu Funsho, Nobert Young, Omotola Jalade Ekeinde and Bimbo Manuel, Afolayan ensembles a first-rate cast that bring their talent and experience to the table to serve viewers a good dish. With the use of great production equipment, the storywriter interpreted the script properly capturing the lively and glamourous lifestyle in Lagos, ‘The Tribunal’ is definitely a must watch.