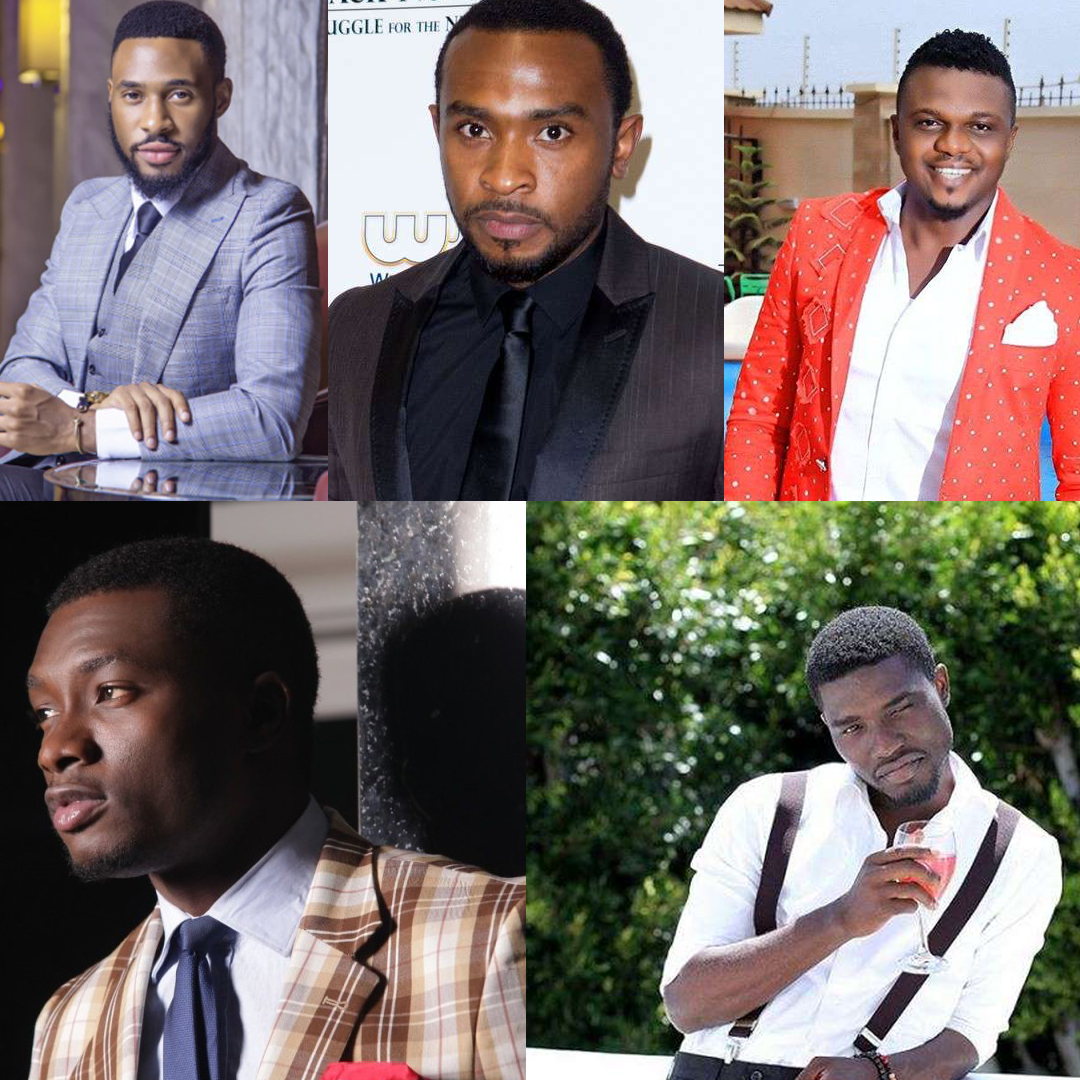 Here are the list of top Nollywood actors making wave in the early part of 2017. In no particular order:

CHRIS OKAGBUE: Chris Okagbue was born on June 23, 1987 into the royal family of former Obi of Onitsha, H.R.H Obi Ofala Okechukwu Okagbue and Ogechukwu Clara Okagbue of Onitsha Kingdom, Anambra state, Nigeria. He is a graduate of Sociology from the University of Lagos, Nigeria. He has five siblings (one older sister Sandra Okagbue, a twin brother Christian Okagbue and three younger sisters Jane Okagbue, Christabel Okagbue and Bella Okagbue). At the age of 17, he broke into the limelight of the modeling industry, appearing on billboards, newspapers and TV commercials of multinational corporations like MTN, Cadbury Plc, Nigerian Breweries Plc (Star Lager Beer), UAC Foods, LG, Coca-Cola Nigeria (Coca-Cola & 5 Alive), Orange Drugs Limited (Canon Extra and Passion Energy Drink), Airtel etc. He is a brand ambassador of Passion Energy Drink at Orange Drugs Limited. He has graced various covers of renowned Nigerian & International magazines.Most recently, Chris Okagbue proved his mettle as a highly talented actor with his stellar performance as leading man in what was one of the most anticipated films of 2017; Lotanna, alongside Ghanaian star actress Ama K. Abebrese from award winning Hollywood film; Beasts Of No Nation. Lotanna was directed by Toka McBaror. It premiered in Nigeria on April 8th, 2017. Shortly after filming Lotanna, Chris Okagbue reunited with Toka McBaror once again as leading man, Jerome to deliver yet another emotionally gripping performance in the film; Kada River, a highly acclaimed true life adaptation film premised on the southern Kaduna crisis in Nigeria, alongside Nollywood veterans, Joke Silva, Rachel Oniga and Ghanaian starlet, Fella Makafui. Kada River is set to be released in Nigeria in July, 2017 and in the United Kingdom in September,2017.

Chris Okagbue who is also a great dancer and vocalist, nurses a strong passion for music. He is inspired by the likes of P-Square, Banky W, Chris Brown, Usher and the late Michael Jackson. As a film producer, Chris Okagbue is the associate producer of the film Lotanna, where is also played the lead role.

EMMANUEL IKUBESE: Emmanuel Ifeanyi Ikubese was born on 1991 in Delta State, Nigeria. He holds a Bachelor Degree in International Relations from the United States International University in Nairobi, Kenya, he started off as a model before pursuing his career in acting. He also speaks fluent Swahili. He broke into limelight after winning the USIU Pop Idol Competition and later on won the Mr.
Nigeria 2014 Competition and was also the first runner up at Mr. World 2014, his biggest role was starring as Femi in the award-winning MTV series, Shuga. Emmanuel Ikubese wows his audience to a delectable performance in the 2017 movie “Ojukokoro” where he portrays the character of a drug addict. In the movie, Ikubese lets go of the stereotype that has trailed his acting career, delivering an incredibly nuanced performance which sees him pour a large volume of emotions into his character. He smartly and successfully walks the line of being charming, hilarious and dense. Without trying too hard, he wins over his audience.

ENYINNA NWIGWE: Award winning Nollywood actor and producer, Enyinna Nwigwe has worked alongside some of the most respected producers and directors in Africa and overseas. Originally from Imo State, Nigeria, Andy/Yina (as friends like to call him) is the son of retired public servants and the last of four children. He graduated with a degree in Economics from the University of Calabar, Nigeria.

It was in the university Enyinna began his career in the arts and entertainment as a runway model and transcended to the sought after print advertising model. He made his first acting debut in “Wheel of Change” (2004) directed by well-esteemed filmmaker Jeta Amata; who immediately noticed his budding acting abilities. While a rather shy person, Enyinna found little trouble engaging in more roles through his endearing demeanor and optimal physique. In 2014, Nwigwe starred in an explosive political thriller, “Black November” co-starring Oscar winner Kim Basinger, Mickey Rourke, Vivica A. Fox, Akon, Wyclef and Anne Heche. A riveting American film by Amata which depicted the violence, corruption, and human injustice in the Niger Delta. It was this film that introduced Enyinna to the American audience and world stage. His most recent and record-breaking film “The Wedding Party” (2016) is the highest grossing West African film to date (400 million Naira). It has garnered attention from international film festivals including its special ‘Spotlight’ at TIFF (Toronto International Film Festival). Enyinna is shooting American King (2017) co-starring Akon, Andrew Howard, Nick Moran, and Miguel Nunez in Los Angeles. Nwigwe is based in Abuja and travels between Lagos and Los Angeles. He enjoys keeping fit by playing tennis. Aside from showbiz, Enyinna is a savvy businessman and considers himself a creative entrepreneur. Enyinna continues to push the standards of Nigerian films; at the forefront of the industry he seeks to represent Nollywood on the world stage while bringing his experiences abroad to Nigeria.
KEN ERICS: Ekenedilichukwu Ugochukwu Eric Nwenweh, professionally known as Ken Erics Ugo or simply Ken Erics is a Nigerian film and television actor, writer and occasional musician. He is popularly known for his role as Ugo in the movie ‘The Illiterate’ alongside Tonto Dikeh and Yul Edochie. In 2001, as a first year student in the University, Erics got his first movie role, in the Chris Ubani directed ‘direct-to-dvd’ movie ‘Holy Prostitute’, where he played a minor role as a medical doctor, with just three scenes. He went on to graduate from the University and began to attend auditions and bagged a few other cameo roles in home movies. However, his 2012 portrayal of “Ugo” in the movie “The Illiterate” endeared him to audiences and opened up more ​opportunities for him in the Nigerian movie industry. As a writer, Erics first published work “Cell 2” has gained attention and has been used in a number of Nigerian tertiary institutions for stage productions and academic purposes. In 2014, Erics won the award for Best Supporting Actor at the City People Entertainment Award, as well as the Best Lead Actor at the Afrifimo Awards in the United States. In 2015, he went on to win the Best Lead Actor award at the City People Entertainment Award.

Ken Erics stars in the comedy movie Omugwo directed by Kunle Afolayan. The movie tells the story of Omotunde, A young civil engineer married to Raymond (Ken Erics) an OAP(Online Radio Personality), has just given birth, coloured by their different cultural backgrounds, their mothers-in-law forcefully move in with the couple to perform the Igbo child care rite called, Omugwo. But instead of relieving their children of the burden of childcare, the mothers’ rivalry complicates life for the couple to comical effects.

SEUN AJAYI: Though Seun Ajayi has been acting professionally since 2007, it has not been an easy ride for him. But despite all the uncertainty, there seems to be a future for him in the world of make-believe. Seun Ajayi, the versatile actor and aspiring director who has been in the game for about 10 years now, delivering lowkey with great performances on both the big and small screen from Mildred Okwo’s Suru L’ere to Jadesola Osiberu’s Gidi Up. It feels weird to call someone who has been working for that long a “breakout star”, but his performance in Ojukokoro (Greed) is so strong it threatens to blow away any and every thing he has done before then. It’s the sort of performance that will make a believer out of anyone. The graduate of Theater Arts from the University of Lagos is one actor with lots of potential, we are expecting more great works from him.