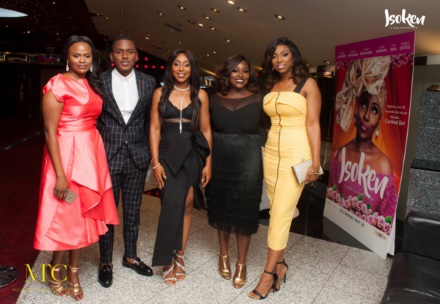 Isoken The Movie; UK-based film distribution company Evrit Film, which specializes in film distribution to all major cinema chains across the UK and Europe, inked the deal with Tribe85 Productions earlier this year, with an international red carpet premiere at London’s Leicester Square’s Cineworld cinema. After the premiere, the film will be released in 12 major cinemas across the UK from 26th May 2017, aimed at bringing the captivating movie to UK’s huge African movie audience

The movie tells the story of a successful but unmarried 34-year-old woman, who has to deal with the societal pressure that comes with being single at a certain age. Also spotted were comedian Wale Gates, musician Breis, distributor Henry Kuble (Evrit Films) and Abass Tijani (DJAMEDIA UK), Tv presenter Dolapo Oni and Bolanle Olukanni.